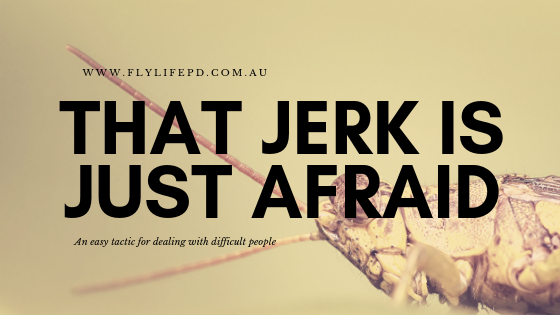 Difficult people have the power to ruin our day… but only if we let them. Now, I know that’s usually easier said than done. But I recently discovered a way to reclaim my power when dealing with a jerk.

The next time you’re dealing with a difficult person, I want you to think about what they’re afraid of.

This particular A-hole that I dealt with several months ago was so aggressive, abusive, and intimidating. I lost sleep because of this dude, and anyone who causes me to lose sleep and is NOT my toddler, becomes my number 1 enemy.

Anyway, fast-forward a few months and I have to deal with him again. I got the sweats, the racing heart, the shaky hands. I started trying to think of ways to get out of it. But then I stopped and thought about why he was such a jerk. What was driving his shitty behaviour?

The answer was FEAR. He was advocating for his son, and he was so terrified of what life has in store for his young guy. The fear of losing control of things as his son got older was just too much for him to bear.

Hey, I could relate to fear. I would also feel desperately afraid in his situation. And I’d also probably forget my manners if this fear was overwhelming me. I’ve got no doubt that can be aggressive and intimidating if I feel the need to protect someone I love.

So now I was on the same page as this man. It didn’t make his previous behaviour okay, but I guess it made it a bit more understandable. I could now work with him and try to keep the conversation reasonable, or at least end it with some respect and empathy. Which is what I did in the end.

So then I started thinking about some other ‘difficult people’ I’ve come across. Fear was a common factor. There was always something I could identify that they were afraid of and that probably drove their behaviour.

In none of the circumstances did understanding their fear suddenly excuse their behaviour. But it gave me a different perspective, and a new way of approaching them… or walking away from them.

Give it a whirl

If you’re dealing with a difficult person, I’d really encourage you to take a step back and think about what it is they might be afraid of. You don’t have to call them out on it. Just keep that thought to yourself and see if you can approach them a different way. Or… walk away confidently knowing that they may be afraid of something, but they have no right to make you feel afraid of them.

Let me know if you try this exercise and if it helps you deal with a douchebag. If you need some targeted help with conflict management, feel free to get in touch.

5 Replies to “That jerk is just afraid: a tactic for dealing with difficult people”