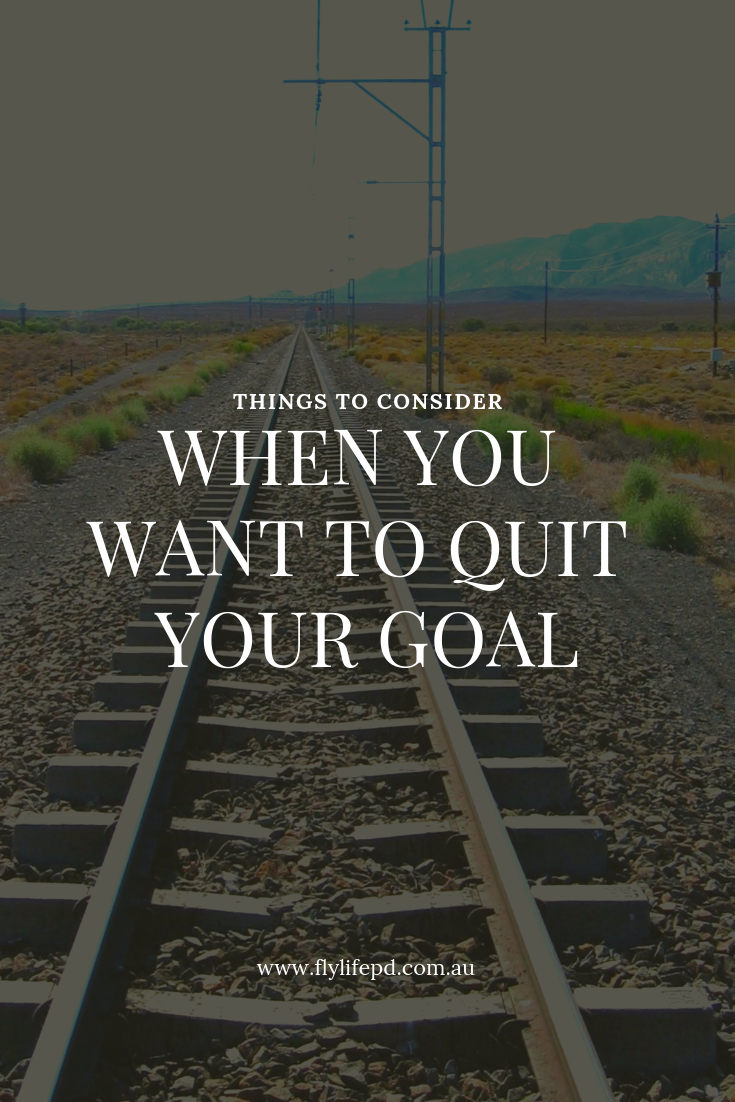 Six years ago, I set myself a goal of completing a university degree. Six thousand times since then, I thought about quitting. And this week I graduated.

I want to share with you some of the obstacles I faced, and why I did not quit my goal.

He told me I was useless

My ex-boyfriend, who I was with when I started this degree, was not supportive of my studying. He told me I was wasting my time and money. According to him I was useless and I would probably fail or quit anyway. He repeatedly accused me of thinking I was better than everyone because I was studying. But he generously brought me down to earth by reminding me that everyone in town thought I was just a stuck up city girl who thought I was something special.

There were times that I started to believe him. And I thought about quitting.

But then I thought of my family, my friends, and my colleagues who were all so excited about my goal. They didn’t seem to think I was useless. In fact, they encouraged me and cheered every time I got my results back. They rolled their eyes every time I got a high distinction. Because they expected the high distinction. They had no doubt in me whatsoever. And so, I continued.

Remember the people who have your back. Surround yourself with those people.

I left everything and started over

As you can see from the previous section, my relationship wasn’t happy or healthy. So, one day I left. I had a bag of clothes in my car and left town. Leaving behind my job that I loved, my friends who I adored and had been my support network, and my house that I had put all my money into building.

I was back living with my parents. I had no job, not much money, and no energy. Having quit everything else, I also thought about quitting my degree. It was just too hard to focus on it now. And what was the point?

But then I thought about the fact that one day I would be able to help other people. One day I’d have the knowledge and the qualifications to help people believe in themselves and set their own direction. But only if I continued. And so, I continued.

My new life was busy

I got a new job, fell in love, made new friends, joined a local Rotary club, and started experiencing a more active social life. My new relationship was the opposite of my previous one. I was previously living a relatively isolated life inside my relationship, which gave me plenty of time to study. My new partner was so adoring and wanted to spend all his time with me. While being supportive of my study and being a student himself, he had a very different approach to study and didn’t quite understand how hard I needed to work at it. Throughout the remainder of my degree (even after we got married) this caused a lot of tension.

I thought maybe he was right and I was spending too much time with my head in the books. Maybe I really was sacrificing too much social time because of my study. I knew I couldn’t do any less work and still understand the subject enough to pass. So I thought about quitting.

But then I considered how much time, effort, and money I’d already put in. I was achieving great results and I knew that I could do it. It was only a bit longer. I just had to maintain enough balance for my relationship to survive until the end of the degree. And so, I continued.

Think of what you have already invested and sacrificed. Don’t waste that.

My grandma and my mum were both diagnosed with cancer within a couple of months. It was the year leading up to my wedding and the two women who I worshipped and adored were both sick and undergoing treatment. Between work, my community service commitments, and my study, I felt unable to support them or be there for them. So I thought about quitting my degree.

But again, I considered how far I’d already come. I remembered what I could do with the knowledge and the qualification once I had it. And I thought about how proud my grandma and my mum would be when I eventually graduated. And so, I continued.

The following year, I fell pregnant. I had a difficult pregnancy, with a suspected miscarriage in the early days, followed by hyperemesis gravidarum for the remainder. Which basically means I constantly vomited for nine months. I would be up several times in the night to be sick, then drag myself to work where I would discretely scurry to the bathroom several times a day to throw up. I had no energy because I couldn’t keep much food down and wasn’t getting much sleep. The sickness wore me down until I was badly depressed.

I nearly had a nervous breakdown trying to get an assignment submitted on time and discovered weeks later when results came out that there had been a technical malfunction and it didn’t submit. The course convenor said I could fail the subject OR I could get medical evidence to say I couldn’t complete the assignment, and then I would have to do a completely new one to replace it. I just couldn’t face the thought of starting all over again on a different topic and going through the stress. So I thought about quitting.

But I only had a few subjects left. The end was in sight. And so, I continued.

Look to the end. Have a countdown. Keep your eye on the ball.

My tiny human didn’t care for my goals

My heart exploded with love every time I looked at my baby boy. And my head exploded with stress every time I thought about my assessments that weren’t getting done. Archie had reflux, and we had a lot of problems with feeding and sleep. He was a very unhappy baby for the first five months of his life, and he only wanted to be in my arms. I would explain to him that I was very close to finishing my degree and would have plenty of time for cuddles after that, but he was not willing to wait. And so I thought about quitting.

But I knew if I stopped now, it would only get harder and harder to get it finished some other time. I’d be back at work AND have a child to raise AND still have uni work to do. It was better just to plough through and get it finished while I was on maternity leave. And so, I continued.

Now may be the best time. Just get it done.

I got there in the end

As my name was called and I walked across the stage, I blinked back tears. I was grateful for every person who supported me and encouraged me. And I was even grateful for those who made it more challenging. It was because of them that I felt so proud of my achievement.

Have you fought through obstacles to reach your goal despite wanting to quit? Tell me about it in the comments.

Want more personalised and tailored support to get you through your obstacles? Please contact me to chat about how I can help.

7 Replies to “When you want to quit your goal”