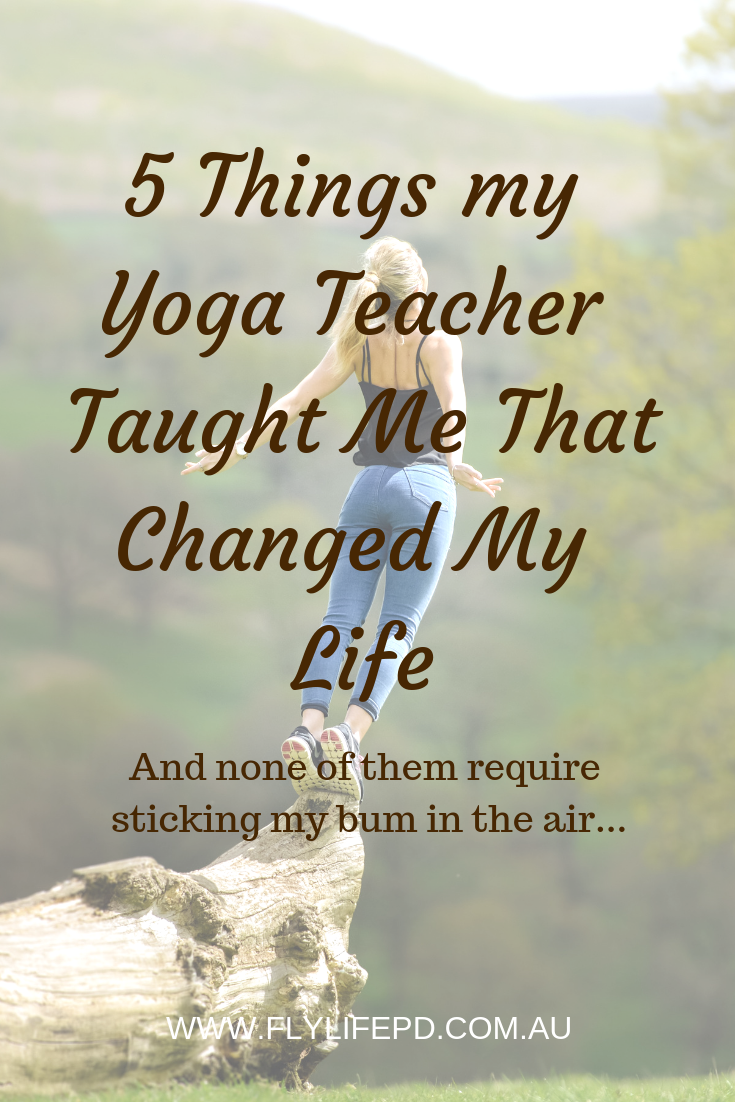 5 things my yoga teacher taught me that changed my life

My first yoga teacher was a gentle, earnest, spiritual, and funny woman. When I started yoga, it was because I had quit smoking and was trying to find some other way to calm my mind and improve my body. I was at the beginning of my path to self-improvement, and Penny, my yoga teacher, was a strong supporter and guide. Without even realising it, she did so much to inspire me.

We became friends and she followed my progress with interest. I was honoured when she asked me to do some early editing of her audiobook, and I was always inspired by her constant search for ways to improve herself and to learn as much as she possibly could. She was in her late sixties, but had so much enthusiasm and zest for life.

I was so sad to learn this past week that she passed away recently. We hadn’t kept in touch these last few years after I moved away, so I wasn’t even aware that she was ill. I regret that I didn’t do more to stay in touch with this wonderful woman. Despite not staying in touch, she frequently pops up in my mind. She was such a positive influence for me, and there are many things she taught me that are always coming up in my day to day life.

5 things my yoga teacher taught me (that aren’t yoga postures):

Penny had such a thirst for knowledge and made me realise how fortunate we are to be able to learn pretty much anything we want. She struggled with technology but there was no way in the world she was ever going to let it beat her! I used to think I’ll just finish my degree and I’ll be done with education. But Penny inspired me to think of all the things I’d love to learn one day, and now I can’t ever imagine not working at learning something. I’ve developed her enthusiasm for constantly learning. Whether it’s through formal education channels, or teaching yourself something through YouTube and online tutorials, the possibilities are endless.

You can control your mind.

There are so many things in the world that are beyond our immediate control. But Penny taught me that no matter what is going on around you, the one thing you have full control over is your mind. With focus and practice, you can take yourself to where you want to be emotionally and spiritually. In times of intense fear and danger, I was able to remain somewhat calm by using this skill.

You don’t have to be the best, but you do have to be better than your previous self.

I’ve always been a bit of a high achiever, but I’ve never been the best at anything. The feeling of total inadequacy has been a constant thing in my life. Penny taught me through yoga that it doesn’t matter what anyone else is doing or achieving. Their experience is different to yours. What matters is that you are working on being better than you were previously. I have taken this and applied it to all areas of my life. Instead of the constant feeling of inadequacy, I now have a frequent feeling of achievement because I know that however far from perfect I might be, I’m still better than I was before. And that’s progress. Penny was always far more excited about progress than she was about complete mastery!

Be true to yourself.

Penny was passionate about a lot of things. A lot of those things were a bit weird. She had some spiritual practices that would raise eyebrows simply because they were out of the ordinary. We would go out for lunch to a café and she would bring out this little gadget and put a tiny portion of her food inside it. The first time this happened I was very confused. Was she taking some home for a pet mouse or something? No, it was an offering to the Gods, she explained nonchalantly, then proceeded to say a prayer and then urged me to eat. While I did not feel the need to take up this practice (mainly because I don’t like to share my food), I loved and respected that it was an important practice to her, and she would not allow others to modify it.

I’ve since learned that this is a pretty common practice in some religions, but it was very rare to see it occurring in a public place in the country town I lived in.

You can teach others even while you are still learning yourself.

Penny had an expansive knowledge of yoga, but she was very open about the fact that she was still learning herself. There were some postures that she could not quite master, but she would still teach them to others and would show great excitement about the fact that we were all learning together. By being open and upfront about what you do and don’t know, and by continuing to learn with your students, you can in fact be a better teacher than one who believes they have mastered the subject and has nothing more to learn.

I will continue to miss Penny and to think of her often, because she truly helped to change my life. The principles I’ve mentioned in this post are some of the main drivers of Fly Life.

A challenge for you:

Sometimes it’s not until someone is gone that you realise what a huge influence they have been in your life. So today I challenge you to think about who inspires you, and why. What have they taught you, or how have they changed the way you do things? If you want, you can just do this as a private exercise, but I’d love it if you would share your thoughts in the comments!